Hailing from the Gateway of the Great Smoky Mountains, Seth Mulder & Midnight Run began its journey in February of 2015, at the Ole Smoky Moonshine Distillery in Gatlinburg, Tennessee. Made up of four like-minded musicians and graduates of college music programs, this group of friends and musicians created a band tied to the rich traditions of bluegrass music, yet one that offers a fresh approach to that "High Lonesome" sound. With each member drawing from a variety of influences, including bluegrass, country, and rock.
The band stays true to their musical roots with tight harmonies and reverence for “old-style” bluegrass music, all while stretching the boundaries of the genre with their song selection, stage antics, and exciting performance.

Throughout my life, I have searched to define who I am and who I want to be. Over the last few years, this led me to look at the name Oh Susanna – a persona I took on 25 years ago – and see if it still expressed who I am today. I realized it had begun to feel like an old costume I used to wear but no longer fit. Last summer, I also came face to face with the song’s original racist lyrics and knew that its racism was definitely not what I stand for nor want to perpetuate. I decided I wanted to take positive action and leave the name and the song “Oh Susanna” behind. I embrace this opportunity to fully merge the artistic and personal parts of myself, to stand up for what I believe is right, to be who I am and who I want to be. And so, my friends, my name is Suzie Ungerleider.
Tickets are now available online at:
https://www.ticketsource.co.uk/whats-on/craigdarroch-arms-hotel/craigdarroch-arms-hotel/suzie-ungerleider/2022-06-08/20:00/t-egrkad

Over The Moon in concert with Longway in support

Sarah Jane Scouten is Moniaive's resident Canadian folk/americana songwriter and has been nominated for four Canadian Folk Music Awards. Originally from British Columbia, she settled down in Moniaive in 2019 after being wooed by the village. She first came to play the Coach House at the Craigdarroch Arms in 2016 and came back on tour several times before deciding to stay for good.

Sarah Jane will be joined by some of her musical pals in the village and maybe even beyond.

GOD BLESS THE PEOPLE OF UKRAINE AND RUSSIA 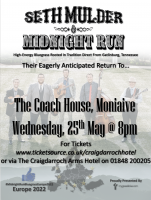 Wednesday May 25th @ 8pm in The Coach House, Moniaive

Band merchandise will be on sale - no card facility - cash only please.