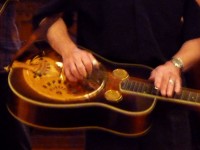 Bluegrass music is a form of American roots music and is a sub-genre of country music. It has roots in Scottish, English, and Irish traditional music.

Bluegrass was inspired by the music of immigrants from the United Kingdom and Ireland (particularly the Scotch-Irish immigrants in Appalachia), and African-Americans, particularly through genres such as jazz and blues.

In bluegrass, as in some forms of jazz, one or more instruments each takes its turn playing the melody and improvising around it, while the others perform accompaniment; this is especially typified in tunes called breakdowns.

This is in contrast to old-time music in which all instruments play the melody together or one instrument carries the lead throughout while the others provide accompaniment.

Traditional bluegrass is typically based around a small set of acoustic stringed instruments including mandolin, acoustic guitar, banjo, fiddle, resonator guitar (aka dobro) and upright bass, with or without vocals.

Old-time music is played using a wide variety of stringed instruments. The instrumentation of an old-time group is often determined solely by what instruments are available, as well as by tradition. The most common instruments are acoustic string instruments. Historically, the fiddle was nearly always the leading melodic instrument, and in many instances (if no other instruments were available) dances were accompanied only by a single fiddler, who often also acted as dance caller.

By the early 19th century, the banjo (an instrument of West African origin originally played only by people of African descent, both enslaved and free had become an essential partner to the fiddle, particularly in the southern United States. The banjo, originally a fretless instrument and frequently made from a gourd, played the same melody as the fiddle (though in a lower register), while simultaneously providing a rhythmic accompaniment incorporating a high drone provided by the instrument’s short “drone string.” The banjo used in old-time music is typically a 5-string model with an open back (i.e., without the resonator found on most bluegrass banjos).

Here are a few good websites to read more about Old Timey Music;

LIVE MUSIC IS RETURNING TO MONIAIVE

'Over The Moon' (Alberta, Canada) with support from 'Longway' (Scotland)

in concert on Friday 4th March @ 7.30pm in The Coach House, Moniaive.

Wednesday May 25th @ 8pm in The Coach House, Moniaive